A Better Environment for (& with) Open Data

This month government, academics, and citizens (and Open Data Hong Kong!) joined the HK Government Efficiency Unit to share insights on the potential of better reporting and sharing of Air Quality monitoring data. Entitled “Open Data and Citizen Science Reporting Potential for Air Quality Monitoring”, the seminar was an exploratory event to see what could happens if we share what people are doing with air quality data, the challenges we face, and the potential ahead for pilot projects and more. Weather and pollution data are no brainer areas to open up to an Open Data approach, as they are topics of interest for concerned and engaged citizens, and the Hong Kong Observatory already makes much of this data available to the public through the AQHI (Air Quality Health Index) website. Connecting the producers of this data with downstream users, from government, academic and non-academic backgrounds, should help maximize the value of this precious data. Open Data Hong Kong are experienced and well placed to advocate as a collective voice for more data sets and better quality data on the environment and air quality, and we’d like to thank Kim Salkeld, the head of the efficiency unit, for inviting us.

Mart has already posted his quite detailed notes on the talks, but to summarize, the first part of the afternoon featured representatives from many of the relevant government departments like the Environmental Protection, Agriculture, Fisheries and Conservation, the HK Observatory, and the Efficiency Unit “1823” enquiries and complaints hotline. Ivy So from the BioDiversity Division of the Agriculture, Fisheries and Conservation Department presented on some of the interesting apps they’ve developed like “tree walks”, but most interesting from a citizen science perspective has been moves to allow the public to post pictures and register animal sitting on their HK biodiversity database and Eco map portal. They’ve also promised to release much of this data as XLS files, so watch this space to see the result. It would be great to have hackathons, visualisations and apps built using this data, and there is a shortage of useful biodiversity data in the global biodiversity GBIF databases, so anything to boost this is much needed. John Chan from the HK Observatory also covered some of the Citizen Science side, presenting on their engagement with schools and interested individuals through their Community Weather Observing Scheme.

The second part of the afternoon presented to point of view of the public. This is where Open Data Hong Kong stepped in, Bastien from ODHK setting the scene with a short overview on the benefits of openness and transparency, and showing a few case studies on how open pollution data has been successful in countries such as the UK (see his slides here). Representing Code4HK Vincent Lau and Harry Ng gave civic hacker perspective, showing examples of what they and others are doing with this data (e.g. their real time visualizations of the AQHI data thrown together in one hour), and highlighting the shortcomings and difficulties working with the data in its current form. Andrew Leyden was the last speaker in the ODHK section, and also highlighted the potential and problems experienced by hands on users of HK Observatory data when building the “Hong Kong Air Pollution” App.

What was clear from this section reiterates the main issue with publicly accessible datasets in Hong Kong. They have great potential, but are presented wrongly, and under unhelpful restrictive licenses, so much time and effort is spent unnecessarily scraping, cleaning and processing this data, these datasets are legally and not practically interoperable with others, all of which reasons put off many potential users. Bastien showed Hong Kong’s ranking in the global open data index, where we are placed 13th in the world for open emissions data, and the main thing preventing our (70%) score from topping the table was the lack of true open licensing. This would be a very easy issue to fix, costing nothing, and massively increasing the potential utility and reuse of our data. 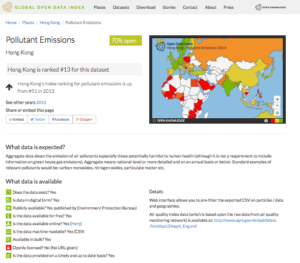 The final section of the workshop brought on some of the formal experts from the Environmental Protection Department and local academics working on this area. Zhi Ning from CityU and Alexis Lau from HKUST both presented data from mobile pollution detectors, CityU doing more grass roots and medium scale sensing work using open hardware arduinos and working with local schools. HKUST have been working with larger scale detection units built into trams, and they in particular have huge amounts of air quality and modelling data collected around the pearl river delta and beyond that would be fascinating to open up and let others work with. Currently hosting 400TB of data that is available for academic if not other purposes, it would be great to liberate and see what could be done with this data if it was made more widely available from public repositories.

There are plans to meet again, so watch this space. With the Efficiency Unit’s support, they can rally government departments around the table, and it would be great to set up a working group at ODHK to continue this work. Any interested individuals should contact us if they were interested in participating and helping us to advocate for open data to help understand and improve the local air quality.